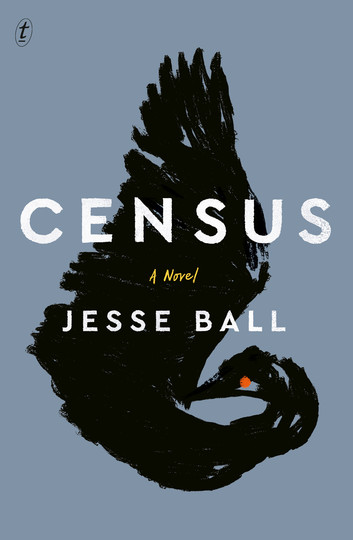 Set in a timeless, nameless place, Census is about a man who, upon hearing that he has only months to live, quits his job as a surgeon to work as a census taker, going on the road with his last living relative, his young son. The premise of this story immediately drew me in.

From the first paragraph, I was taken by Ball’s crisp language; and it’s his language, really, that takes the bulk of the work of the book. Things do happen to the father and son, but in snapshots, with any drama, suspense, and storytelling kept to a bare and almost bleakly indifferent minimum. From Zone A to Zone Z, he travels, and as you go along with him, descriptions of people, places, and things are set in this bare language so that, eventually, you see it more as a an allegory than a novel. As I read, I liked this, I liked this a hell of a lot. I liked it because Ball uses choice details instead of spraying us with so many over-researched saturation techniques that abound from poetry to short stories to novels alike (in the overstimulated culture that we live in, this is to be expected but I’ll be damned if it has something to be gotten used to). Picking particular objects or people to describe at key moments in the story lifts the whole of the scene and the story and the work, really, to that level of art that has me yearning for the old works of Camus, Woolf, and Mann.

As they travel forward alphabetically through the census zones, the man travels backwards just as much, to his time as a doctor, his training for the census, and his marriage with his wife before she died—a wonderfully odd woman that you just know couldn’t be in the novel since to make her of flesh and blood would scatter away the smoky image the narrator has conjured for us (which seems to make her a personification of the ghostly country Ball gives us and for the narrator to travel through).

In one sense, Ball has created his narrator exquisitely. Since this is a grey, formless world he drives through, as almost in a dream, the narrator is dream-like himself, and the subjects he speaks of are made the more magical. Through this lens, we meet all kinds of people, ranging from young to old, from kind to cruel, and from banal to strange but all possessing that eerie quality that dream characters do of blurry familiarity. They are peripheral people.

But as dream-like as it began, the novel succumbs to the narrator’s cold personality, and becomes a bit plodding as you continue. His language, though stark with clear brilliance, becomes rather sentimental, making his survey of the land and the people around him not crisp but dry, overheated by overthought. All this creates a novel that by the end feels too cold, too vague, or too abstract in parts to really love but too warm and genuine in others to really hate. Or in another sense, in giving us only snapshots of the land and its people instead of delving into any real emotion or conflict of the story, or even of the hearts and minds of this land’s inhabitants, Ball creates, instead of a dream, a blurry reflection of something we can’t quite see. This is a novel of clouds—you see what you want to see. And the thing about staring at clouds all day is, you don’t really get anything from it but your own satisfaction at finding the objects you’ve found.

Another disappointment of mine with the book was his seemingly willful ignorance of any kind of conflict. In Zone D, they entered the home of a family of nothing but quiet hostility. Words were exchanged, violence was preluded. Then, without a whisper of any reason why, the scene ended with a bit of laughter entering from the other room where the children announced how wonderful the narrator’s son was. End scene? And the son himself is a curious and bright young boy but who has special needs mentally. It’s true that his condition and his personality bring out either the kindness or the prejudice of the people whom the narrator visits (which is what Ball intended, I’m sure), but even this is done in a vague, smoky way where any lesson that’s taught is finished in a matter of a few lines. This book has a wealth of ideas and situations in showing great moments of drama, conflict, passion, or vulnerability and yet passes them by just as indifferently as the narrator passes through the town. Even the man’s death itself is something you forget until about halfway through the book when he begins to get sick, and even then there is still no sign of urgency, vulnerability, fear, or even anxiety. A more calmer, more indifferent dying man I’ve never met, fiction or fact.

That for me was the true flaw of this novel—its lack of conviction. Being stuck between an allegory and a novel of realism, it tries to be something different but simply seems something muddled by both. Refusing to offer the reader anything but a dreamy, nameless world, it fails to embrace this anonymity to teach us any lessons to learn; and when Ball finally indulges us in scenes and moments of potential growth from its two main characters, he scurries away from it, dropping the moment entirely with nothing but even the vaguest try for an answer.

But, then, this isn’t really a novel, is it? Without giving too much away, this story has roots in the real-life, so much so that it would be more accurate to call this book a meta-biography which centers on one character–the son–from the viewpoint of the narrator, a thinly disguised version of the author. Because this book was written as a type of dedication, coming from a personal place (as both the introduction and the appendix of old photographs in the back of the book shows), it bewilders me to find only flickers of emotion and genuine humanity in this book. Maybe he didn’t want to make it too sentimental; but in giving us only hints of sentimentality, he has strengthened its bond on our minds. By filling up a hole that isn’t there, he’s created one. So it is another amalgam, this time of truth and fiction; and like the first one, failing to be either one or the other, and unable to be a confident synthesis of the two, it is a shade or two grayer than its two former colors.

I’m harsh, I realize, but it’s because, being a fellow writer, I fell in love with this book by its dust jacket and its introductory chapters. Lured by the premise, and, having been given an intelligent, capable, quirky narrator to follow, saw so many fresh and challenging opportunities to show life, death, and the business of living. In its masterful spots, it showed glimmers of life and humanity that I’d read or even experienced through a book  before. And what is literature but vague sharpness; the showing of a dream from the peripheral of an artist’s mind to a reader’s?

But in the end, its shooing away at its sentimentality got in its own way. This novel didn’t make me feel for any of its characters, and maybe too much for its young star. If Jesse Ball had written a memoir this cold and philosophical, we’d feel he was numb, but since he’s written a novel loosely based on a person in his life, we feel he is “among our most compelling and daring writers today” (Los Angeles Review of Books).

Since I was a kid, I've been writing everything from flash to poetry to books--and now, articles on literature and the things that help create it. View all posts by literatureadjacent77

One thought on “Book Review: ‘Census’ by Jesse Ball”